It could have been a huge disaster and it almost was when I decided to update my work iPad into iOS 9. I didn’t think at all (I admit), I was just happy and singing la-la-laa as I downloaded and installed the iOS 9 package. But it didn’t go that well.

In our household we keep our gadgets updated. Isn’t that what you’re supposed to do? There’s an update, you download it and you install it. Things are supposed to work after that. No Millennium Bugs here, right? So I updated my iPad.

Did I do the backup dance before the update? Yes and no. Automated iCloud backups had been done – but the latest was from a couple of weeks ago. So when the update didn’t go as I planned, I lost some work that I had done during the past two weeks.

The thing that happened with Adobe Ideas was a hit that nearly caused me a strooooooookerrhghghgh. 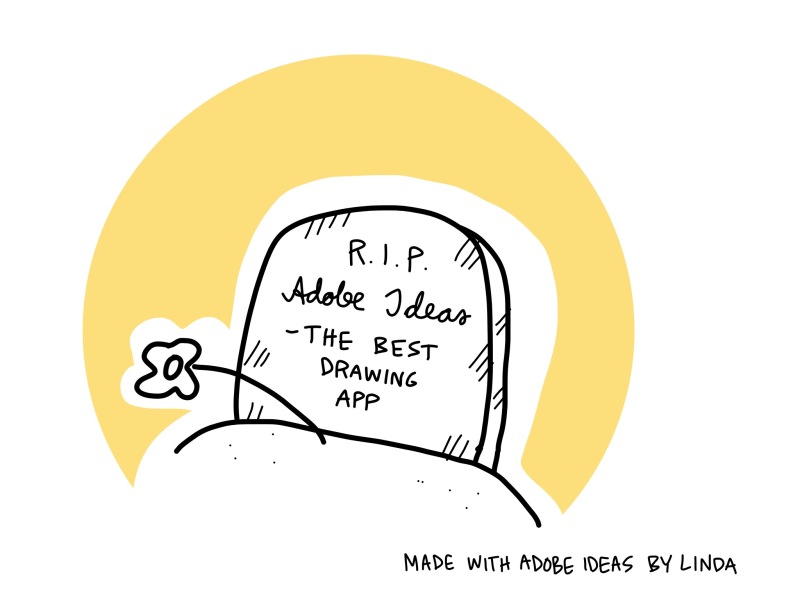 I’ve been using Adobe Ideas roughly some five years now, basically since I started using iPad. And I’ve liked it. In fact, I still like the drawing app so much that I’ve been using it for almost all my work. Until now. Now, before you ask, yes: Adobe has offered Adobe Draw to replace the beloved Ideas, but you know what? Adobe Draw isn’t that good. I still can’t get the hang of its zoom function and the most important tools (for me) are placed like they’re in the depths of Mordor. And you still can’t send vector pdf from Adobe Draw directly via e-mail. So Adobe Draw just isn’t the app for me. (For God’s sake, do something about that app!) 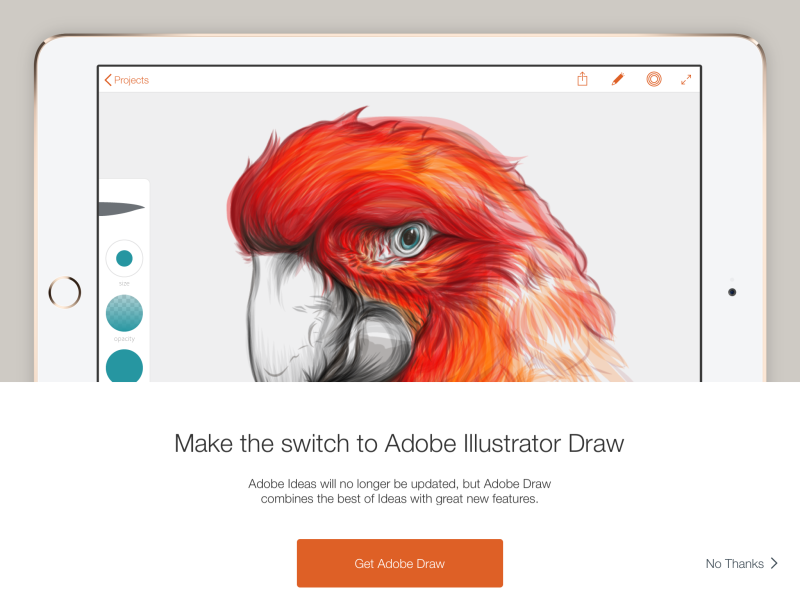 Make the switch to Adobe Illustrator Draw? No thanks.

My Adobe Ideas died in the iOS 9 update. And I couldn’t get access to my work. All my work. Had I been using the Adobe Creative Cloud? No. Why? Because… I hadn’t had the time. And energy. And I had nearly forgotten about it. And the password. With numbers. And Capital Letters. And and and. And to make things worse, I was having a real-time live illustration gig the next day.

Luckily, there was a solution. The only thing I could think of was to go to the nearest iStore and get a new iPad. So I went to iLaakso and bought an iPad Air 2 (and got some discount for the iPad cover because I promised to mention them in my blog). It still had iOS 8 so I was able to restore my iCloud back-up into it. And my beloved Adobe Ideas. The only thing that I lost (for now) was the drawing work that I had done in the past couple of weeks.

So now I’m using a new iPad with and old OS just to be able to use Adobe Ideas. I know this is temporarily but before I find a suitable drawing app, I have to do this.

What did I learn?

What doesn’t kill you makes you angry stronger. But I also (hopefully) learned something. 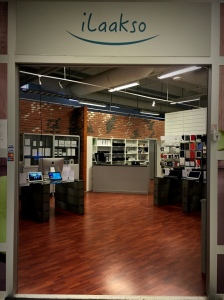 So thanks, iLaakso. You saved my day.

My question to you, my dear readers (all three of you): Which drawing app do you prefer? I tried an app called Concepts and it feels pretty good. It still lacks the send pdf function but otherwise than that I get good vibes. Which app would you recommend? 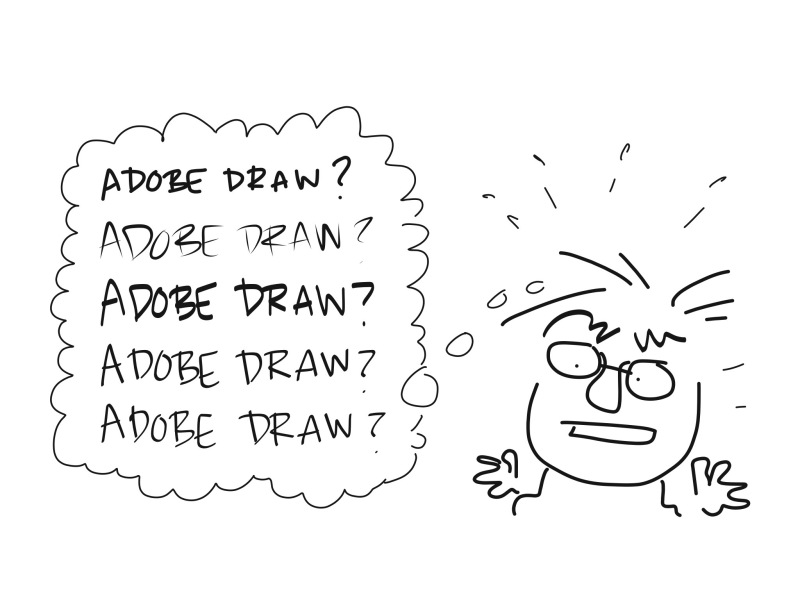 So… The time has come: my favourite tool Adobe Ideas is no longer updated. Instead, a pop-up message said that I should start using Adobe Draw.

How is it different?

The basic functions of Ideas are all there but some of them are hidden underneath other functions. E.g. the erase tool is deep down somewhere in Mordor – or so it feels. Sure, you can undo the previous pen strokes by wiping with two fingers but it doesn’t help if you need to erase a larger area in hurry. Another tool that is hidden is the merge layers function. Adobe Draw also asks questions and verifies decisions – just like an Ericsson mobile phone from the 1990’s. That Swedish-style discussion process slows me down and I guess that might cause me some trouble in the midst of real-time sketchnoting. On the other hand, there have been times when I wished that the Ideas had asked me one more time if I really want to merge layers…

That zoom I love

I loooooove Adobe Ideas because of its marvellous zoom function: it’s swift and it’s smooth, it’s fast and it never leaves me in trouble. The zoom in Adobe Draw feels… sticky. Like it has got a terrible hangover and it just cannot move the way it’s supposed to. Dear Adobe, what have you done with it? Also, adjusting pen size has gone from bad to worse. It wasn’t that handy in Ideas and now it takes a lot of time when I try to find the pen size that I want.

The interesting feature in the Adobe Draw is the use of shapes. I’m not sure if I totally got it, but it feels like it’s going to make things easier. Now I’m able to build a shape library of my own with images that I use often, such as speech bubbles, arrows, etc.

Another thing that I like is that in Adobe Draw one can finally arrange drawings into projects.

What I would have wanted

Naming things makes life easier. That’s why it would have been a nice feature if there had been a chance to name both layers and colour themes. Naming the colour themes would be very useful in a situation where I draw something for a customer and they want me to use their company colours. If they contact me later and want something more, I’d have their colour theme ready to be used.

All in all the change from Ideas to Draw might be a good thing. I just need to draw, sketch and doodle more than ever to get used to the app. Also, I need to find a stylus pen to match the app. I have purchased various pens with both hard and soft tips, but I still keep using the old soft-tipped Bamboo pen. Any recommendations?

There’s an interesting conference going on in Berlin called EuViz 2014, European Conference for Visual Thinkers, Practitioners & Facilitators. I couldn’t attend the conference myself because of my big, pregnant me, but I was asked to share my sketchnoting tips for those who are interested in digital visual thinking – that is working with an iPad.

So instead of joining the expert round in Berlin, I made a (horrible) tutorial video (in hurry) for one of the pre-conference sessions. If you want to waste some 12 minutes of your life by watching my video, here it is: 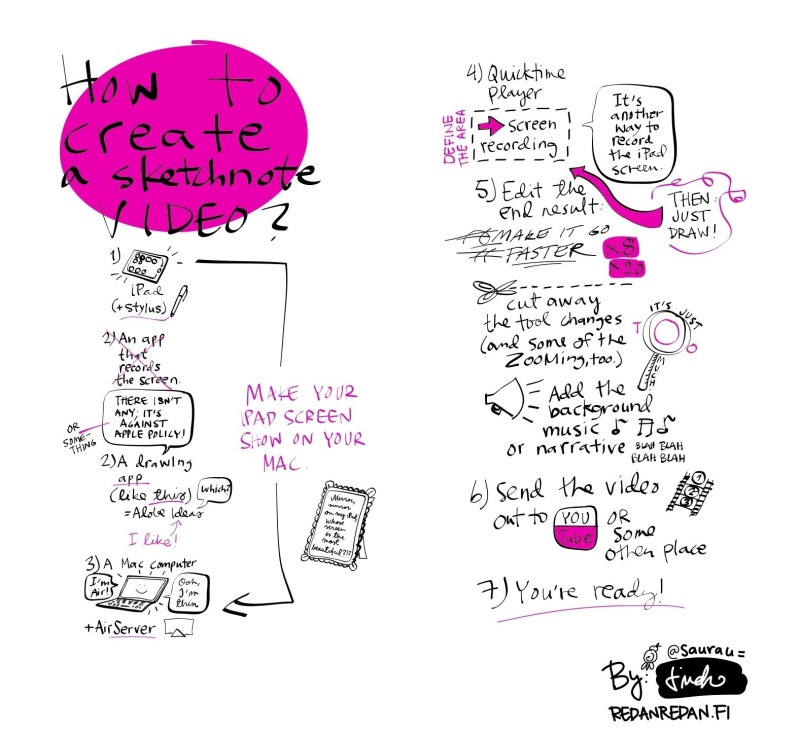 This isn’t the first time that I publish this picture. Last time it had such a low resolution that you could barely read the text. Hopefully this helps you this time.